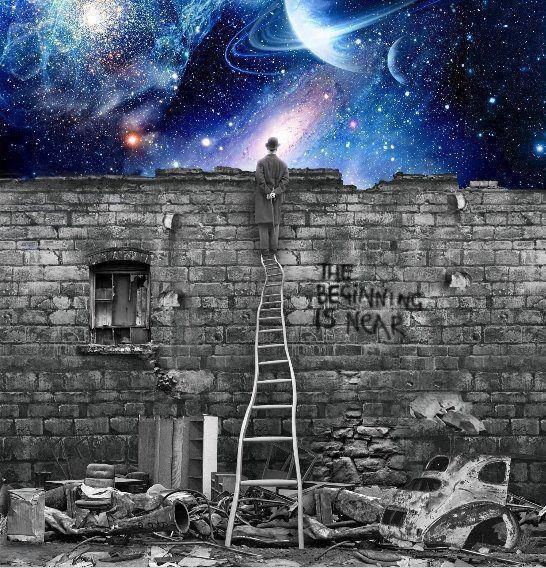 Eve: CM, now speak straight. Are we to prepare ourselves on getting old and crippled on this sphere, bowed by frustration an cut in pieces by the empathy we feel for all those feeling foresaken by their creator?

Will you leave us for execution as it was done with John the Baptist? Now, come on, come on, speak straight. I’m curious to hear your comment. Will you tell us to prepare for becoming chipped in 2016?

CM: Eve, beloved, this is CM. As you are speaking about empathy, let me emphasize that it’s exactly this empathy I have for you and all the others holding the light divine on this planet. I know that you feel like all the generations before who were kept to be prepared to become the acting organs and executive, but finally had to end their order sitting on the bench.

Don’t count the years of delay to me of which I’m well aware. But remember, BEYOND was just recently, measured against the time passing since my return here. I’m aware about your burn-outs, dear ones. I won’t force you anywhere if you need a rest.

The main deal of BEYOND is more than sufficient to put my signature below a document of honour. If you just were aware about the many many threats we have been protecting you and your fellows against ending like John the Baptist.

You recently mentionned that allowing the execution of John the Baptist was a senseless using up of resources. I will tell you what it was: It was a broken heart, mine. Saving him DID NOT WORK! It simply did not work! It was prevented in the same way other mean things were allowed. Before his execution John went through a mental hell but finally he was in peace, as at least celestial comfort was available for him and reached him.

But I was not in peace with that, as I knew for certain that my plans had been crossed. Being breaking honest I admit that the death of John the Baptist was another reason for my acceptance of torture in regard of myself. Making a leap forward into the present times I must hint on the complexity of the circumstances. We have built that shield of protection (Van Allen Upgrade) and must make sure that it will work if needed.

We have hinted – more than once – that the finals would look hard and hopeless to you, but that you MUST NOT ALLOW TO BE TAKEN BY THE ILLUSION OF DARK SUPERIORITY. The best you can do is to go on living as divine executives, to make your decisions on my behalf, to keep your heads over water and to rest if you are running void of forces. Use the time well to train cooperation with the midwayers to gain more control every day.

Forget about that Nostradamus shit in the net. I told you we WON’t allow dark superorgasms. Currently Mohammed is working sleepless permanent shifts to find solutions to the totally derailed ISLAM thing, which is really difficult because of the high number of robotics, of course also being of concern to the problematic global affairs. Ok, Eve, now take a rest.

Always with you, CM.

Just received new year newsletter and it’s one of absolute  happy campers. For all of them life is just a big party and fun, at least this is how it comes over. I’m asking myself „what the heck am I doing here?“

The NWO folks just murdered the whole family of a US movie maker (David Crowley) including himself, they „suicided“ him, having nearly finished the movie GREY STATE to reveal the dark ops with chipping and martial law and population reduction, FEMA camps etc. This world is on a ghost train to hell and this plastic world with Barbie and Ken is just fun riding  without any idea about their future. Exactly the type of fellows who would never question the „suicide“ explanation they are given by the media.

Eve: CM! WHAT THE FUCK DID YOU THINK ABOUT ALLOWING THIS MOVIE MAKER AND HIS FAMILY TO BE MURDERED?! It’s hard to imagine that you had no chance to rescue him and his family!

Eve: I wanted to get an answer instead of a question back.

CM: I’m pointing you into the direction.

Eve: I don’t get it. How many of you guys up there have watched without doing something? This guy was of importance, of GLOBAL importance, and he gets blown, including his wife and 5 year old daughter. How can THIS be your idea of support? Or are you telling me that a universal NSA managed to prevent your efforts of protection? That maybe there are strings in your universe you still cannot control?

CM: And you think, YOU got the complete survey, right? Have you ever thought about the idea that eliminating the whole family of an activist – when the movie is nearly completed and ready to show, when the trailers have already become wellknown on the net., is a better evidence for the existance of dark ops influence and waking up than just a mere label on the movie, stating it was a mere conspiracy theory?

Eve: That sounds as if you were in need of demanding a victim…. ?

CM: The bodies of these people found have not been their original ones. We beamed the family up shortly before the criminal act and replaced them with identical clone copies. Now, what’s your idea of rescuing?

Eve: I had thought about something more obvious as a signature for your presence.

CM: Go, ponder, Eve. Ponder about the consequences of any possibility coming to your mind. Dead attackers in front of the house, e.g. might have caused the parents going into jail and the child into a state institution where abuse takes place. Vaporized attackers woud have remained top secret beyond public knowledge. This family got what all of you are longing for: Being aboard with us, being removed from the game.

CM: I’m not too convincing, so it seems. Anyway, the world has one more evidence for the brutality of the forces dominating you. Wasn’t evidence something what you need and want?

Eve: How many have been murdered and not been any subject in the daily news?

Eve: So far, the psychopaths don’t care about.

CM: Oh yes, they do. They are trying to speed up their agenda which brings us even quicker to the tipping point of „it’s brewing“.

Eve: What makes you so sure that YOU will realize when that point is being reached?

CM: I suppose, I’ve got some skills.

Eve: Otherwise you’ll get a lot of skulls.

CM: MY GOODNESS, EVE! How long will you let me stand in your dock?

Eve: As long until I get evidence that you MAKE AN END TO THE CRIME OF THE ANTICHRISTS. As far as I remember, our contract conditions were a bit different regarding the timelines, before we came here.

CM: I hope you did not miss and READ these small printed paragraphs.

Eve: Come on, that’s NOT funny.

CM: Eve, WE RESCUED THESE FOLKS. Are you indicting me STILL just for doing it MY WAY?

Eve: No. But you will agree that to the public the situation does not look as if you had goaled the Antichrists, but rather vice versa.

CM: Then, how about studying the fact that hardly anything is condemned to be as it looks like.

Eve: Then, probably I’m just looking pissed and am a happy camper inside?

CM: Eve, you are turning the meaning into being ridiculous. That’s not fair.

Eve: Sorry. This is my way to deal with the situation. Much is not fair down here. And a long as my front cerebral brain cortex still works I’m the empathic attorney for all your starseed employees, trying so hard to make a difference.

LET THE CURTAIN FALL, CM. PLEASE, I beg you strongly, MAKE AN END TO SUFFERING. On behalf of all the abused ones, the tortured and mistreated beings, including this plant herself. MAKE AN END NOW, YOUR WAY, IN YOUR SOVEREIGNITY. Enough is enough. How many years ago did you transmit the piece with that title?

CM: You have been heard, Eve. Can we leave it with that, now?

Eve: Your will be done.

CM: I’m deeply honoured about your committment. This is not a job for happy campers. Neither below nor above. Rest assured that I do make the rules and that everything has a reason for taking place or being countered in this giant project. Deepest gratitude to you and your team for holding on so committedly. Salu.

(it seems the link cannot be seen rightaway. Just move your cursor below and it will appear)

might be gone, soon, so do what can be done to make it reappear.

David C. is a part of that movie, a very gentle and kind looking man, clearly a starseed, shining personality. Shocking to me appear the scenes showing interviews with American people who state (you won’t believe it, the movie just started itself on my browser) they were absolutely convinced about the fact that their government was good and right and responsible. One was asked by the interviewer: Your government is going to kill you and you say that’s right? Answer: Yes. Now, THAT’s the most perfect result of a brainwash which can ever be reached. Most are in the cage already, doors are going to close. Soon. Please, SPREAD that film, for global sake.