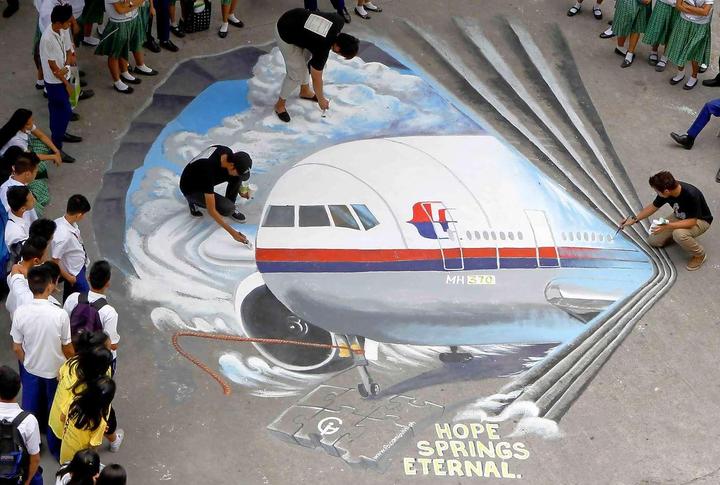 Esu, do you have some minutes for a check-up?

Can we … or let’s say … is there any comment in regard of the missing plane, oh, I forgot, … since yesterday according to mainstream…it’s not missing any more.

Indeed, Eve. After about 17 days the people from secret service decided and took action according to which story they’d finally „sell“ to the public. 17 days is quite a long time for preparing and making a show occupying many departments and every single of them has had a share, some of them even quite amusing. For reasons of transparency I’m going to make a short summary from that, out of all the funny stories „knitted“ around the core, which is:

The plane goes missing, disappears from radar, but the mobiles of the passengers are still active for at least 4 days – no black box signal.

Now, though the NSA did not admit to know anything about the reason you can be pretty sure they got the message, as they were aware about the dirty plan they had with the aircraft. They also were aware about our warnings, but like small kids they chose to go on believing they’d come through finally with more bullshit. So, when the plane disappeared they knew pretty well what it was about.

Several scenarios were set up and tested by placing assumptions in the net, in order to find out from the reactions which one might receive the greatest acceptance from the public. Of course, no perfect set up possible, as some things simply cannot be explained by common knowledge of validity.

STORY A
WRECKAGE IN THE SEA

Several New Age specialists working for global intelligence have had big fun using their phantasy and sending out wild stories to some of their „chipped“ channels, every single one different. Unfortunately, our former organization came out as one of the first, claiming the „wreckage of the craft was exactly where it went missing from radar, in the sea“. Uh oh. So, use your brain. No black box signals and mobiles still active? Hm,… go ponder!

STORY B
THE PATENT STORY AROUND CHINA AND ILLUMINATI

Then we have another cover story about the subject of a chinese enterprise around patent holders, 4 of them in the plane, the 5th one from the board of the company and a front cover for an illuminati Big Wig. The point: The plane was assumed to have been ordered „attacked“ to eliminate the 4 patent holders for the sake of the illuminati guy and 5th, who would then get „all“. Don’t you think intelligence might have had more effective means to get rid and to liquidate these 4 men with less attention to the public eye?

And again the question of the active mobiles is not being answered.

Ok, next. Another „story“ with real deal character. A secret freight – assumed to be dangerous goods (A or B weapons, e.g.) was transferred (insiders say „trafficked“) to the aircraft from a ship before take off, and the two specialists „in the knowing“ were already found dead. It was said, on researching the pilot’s house they found he had trained himself landing the craft on some small Maledive island, where the US are reported to have a military base – including underground stuff – where the dangerous goods were destinated to be taken. So the story tells, the plane was hijacked there – and later they added . … it had an integrated technique enabeling it to be remotely piloted. But why would the pilot then have himself trained on landing there??! And apart from this: Aren’t you aware that the US military bases are all connected to each other with subground tunnels, where dangero us goods could have been secretly transported, still without making that much attention to the public eye?

Now, here we go to

COVER STORIES FROM NEW CiAGE AND ET MYSTERY AND GF

A name of ours, heaviliy being misused for this purpose, is ASHTAR. Ashtar is our commander of the New Jerusalem Evacuation craft, a big mothership which can take whole planetary populations, if needed.

And I can tell you, folks, he just had to shake his head about having made it to the target of NSA desinformation campaigns – here some examples.

So, your mainstream announced special diving robots had found the wreckage, crashed, after sighting parts. Well, not all media seem to know this. Some still claim it was not sure, including the Chinese.

NSA had 17 days to prepare fake wreckage parts to be thrown into the sea (did we not have it this kind whith nukes in Iraq) and now they still have the rest of a 30d period to arrange a faked black box to be found, confirming „their story“.

SILLY IDEA, GUYS. Very unintelligent. – as you are well aware we have all evidence saved. We hope that by the time evidence will be revealed at least some key persons in mainstream will have the heart to come out and breakthrough in regard of censorship. Holding truth back, going on with selling lies, will not have any single advantage for you when the balance will be made. Unwise by you blackops, you have been riding yourselves into the shit deeper and deeper. The mudslide in the US state of Washington almost appears to be symbolic. You, the „makers of mankind“ have been screwing just everything including nature. Now, nature will screw mankind more and more.

Oh, yes, Esu. Guess what…. our local fun radio reported in today morning news: More people were dying from polluted air! Isn’t that straight in the face – remembering all these NWO chemtrailing for reduction of population?

In fact, Eve. You know what this is about, most of the other people though think about pollution by cars and industry.

Coming back again to the plane missing, Esu. How are the passengers? Won’t you allow them to make contact with home?

At first, all of them are fine. They are enjoying the New Jerusalem which is – for newcomers – the name of Ashtars evacuation ship. They receive psychological support and teaching, and nearly all of them are in peace with the situation. Until the story will be presented „closed“ by intelligence, no calls will be made. There are several possible scenarios set up to confront the planet with the truth, always depending on the circumstances. But all will end with the closing up of the dark toy areas. You’ll understand, this is not yet the time for details.

Sure, Esu. Thanks for updating a bit and for enrolling your collection of Hollywood scenarios. It seems, they overdid it a bit. So what, we are used to it.

I’d recommend everybody to go and ponder more carefully before buying anything out of the bag of mainstream.

It’s important not to miss the right hour to raise up,

WHEN IT COMES, BE THERE AND STAND IN FOR YOUR CREATOR.

Wish you well by heart