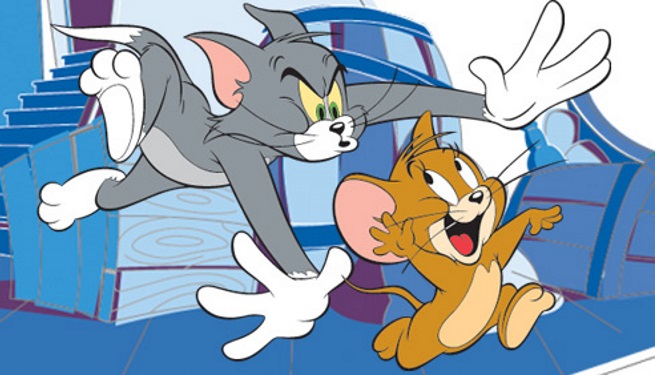 Now, CM. What are you and Esu planning for your b-day?

CM: Spoiling the party of the dark.

Eve: Now, THAT’s at least something. Is your tool box prepared?

Eve: So, no sentimental hang around with excursions into past times?

CM: All of Nebadon history reports about the playing out of wild cards. In some Tom&Jerry manner. I’m just little Jerry, you know. Big Tom Cat was trying to eat Jerry. Or – to speak in more ancient terms: The thing of David countering Goliath.

Esu: In the story of a universe containing some rotton eggs.

Eve: No wonder that all comedy seems to be inspired by this pattern. Beat against beat. Tom countering Jerry & Tweety, or Captain Bluebear putting sugar into the tank of „Feinfingers“ world destruction machine. Not much about sitting upon rosy clouds at an eternal barbecue.

CM: It has been a challenging ride to let the air out of all these blown up godplayers.

Esu: Actually, it still is.

CM: But I must say, some of my wild cards were really gorgeous.

Eve: to name one?

CM: Well, the Melchisedeks thought to have played out a wild card by downgrading Adam as my direct son and descending one, and to force him into working as a Melchisedek priest under their rulership in the Telos project. But finally, this wild card booked the harvest on my account, as the Telos project developed and prospered according to the Nebadon concept, as Adam never ceased to be my son and to add an infinite quantum of love to the Melchisedek concept, not only love, but also humor, which is at least as important as love and which goes hand in hand with it

With an original Melchisedek this project would have never been as successful as it went to be under Adam aka Adama of Telos. So, we are talking about a transformation of questionable wild cards into one of the light.

CM: Esu with my double incarnation was a wild card, too. As well the Kumara troop in general. In between it seemed I was missing the opportunity to play out further wild cards. I seemed to get short of aces in my sleeve.

Eve: So, CM, you should wish another wild card for your b-day.

CM: (giving me a look over the rim of his sunglasses) I have one. You and your little team.

Eve: That’s too much honour for Jerries in a cage.

CM: You have cracked the cage open, and now it’s likely that we’ll see some running in all directions, mostly the view of asses from behind.

Eve: Let me recite „the killers“: I did my best to notice when the call came down the line, out on the platform of surrender… I was brought but I was fine…

CM: Wasn’t there another song about „the Lord and the devil playing chess?“

Esu: Spooky, but that’s pretty much how it really went.

CM: Unless you use a wild card. Didn’t you once ask „Is God allowed to work with tricks?“ And I said: YES, he is. It’s just important to put the correct label upon the jar.

Eve: If somebody asked you in an interview about the making of the devil – what would you explain?

CM: You could easily answer this question by yourself. Devil is a being of divine origin who decided to abandon the connection to the source, realized or unrealized by the self for reasons of self-service versus service to the divine spark of love.

Eve: That sounds as simple as it is logic. But … CM?

Eve: I’m afraid to say, I fear your wild card has turned some cosmic „heroes“ into „handicapped by density“. …. Isn’t that as if you tried to win the olympics by a small team of disabled ones?

CM: Just look where the big team of the „gifted“ illuminated ones has brought my creation to. Isn’t your literature full of tales stuff telling about the Jerries of the world making Tom finally look like a „flatcat“?

Eve: Your creativity in metaphores and wording is really impressing. So, if I have to kiss a frog, just tell me about, at least I’d prefer kissing one to boiling one.

CM: Which brings me back to cause and effect. Sometimes effect comes out in a very different way than you expect.

Esu: He means: if somebody sees a frog and intends to boil it, he/she just spoils it.

Eve: Esu, the little poet in a jam session.

CM: What I want to say is that it’s unhealthy for snails to take a bath in a salt lake, being as well analphabethic – not able to read the warning signs. Or that it can be quite shocking for a minority of illuminated snails to find out that their city was named „Salt Lake City“, followed by the big blackout.

Esu: Today is the day of the meta-phores and double sensed verbal expressions, so it seems.

CM: Simply, if forces go ahead and hack the parameters of cause and effect in a creators universe, it can last just a certain period until there will be a wild card countering the concept of „reward for bad deeds“ and replacing it by strengthening the good. For, listen:

What I forgot to say 2000 years ago: Yet, my kindom is not „of this world“, which means, NOT YET FULLY IMPLEMENTED, but IT WILL ALSO BE OF THIS WORLD, for this has always been the goal.

MY KINGDOM WILL COME DOWN AND FULLY IMPLEMENT ON THIS PLANET AND I DECREE THAT ALL WHICH DOES NOT RESONATE WITH THE TRUE DIVINE, MUST PERISH. SO BE IT.

CM Aton of Nebadon with

authorising the big clean up

on behalf of Papa Source.