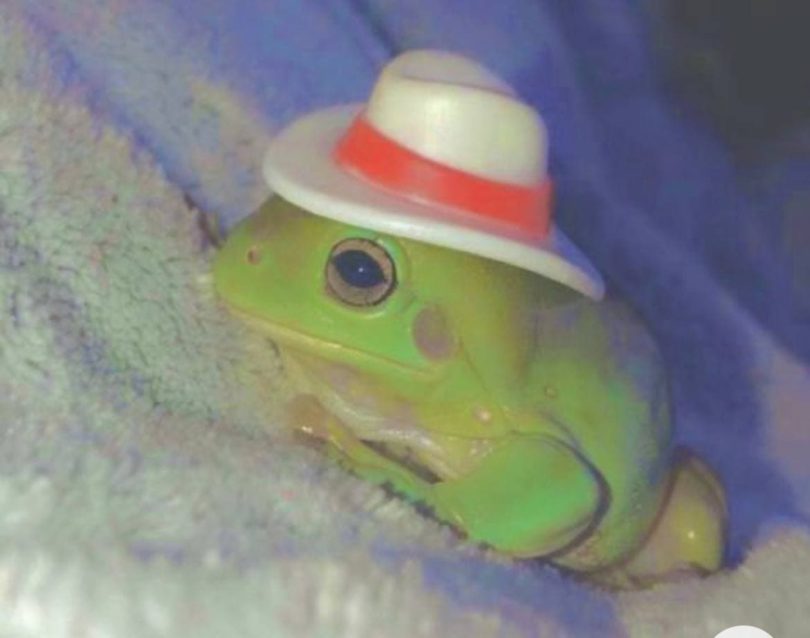 (Eve in 2021: Had he then told me the frog was named Pepe….
I would not have understood that, grin) 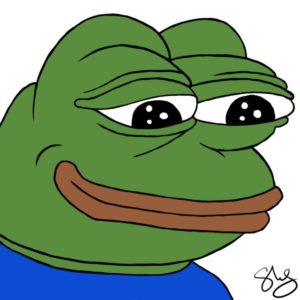 Hello dear readers of Christ Michael, it’s me, Esu. These last days come out to be more challenging than ever. The energy marker of rays and photones rises steeply upwards, while the magnetosphere is in its final throes. Reaching the peak of the curve the “frog will visibly change into a prince”.

You are aiming at the tale of the frog prince?

If you will, yes. Many among you have been looking for frogs in their ponds over long periods, following the phrase: Kiss all frogs, one may be your prince.  Many of the frogs had decorated themselves with crowns, faking the seekers. The frog kissers were due to find themselves anywhere but not where they originally intended to arrive.

Where were they heading for?

Into the arms of the “Prince of peace”! But instead they were finding themselves in the claws of  any sects or in the stanglehold of astral octopuses which were having an easy job by the lack of development with the individuals. In case the seekers were lucky they succeeded somehow to free themselves and to go on seeking, however having bad luck they remained dominated until leaving this plane. And it is not just the small sects having set up a small crown and claim to be the only bringer of salvation. Unfortunately it is especially the big churches and religions who come along your way in your ponds of seeking, – presenting themselves as capital toads, unctuously sitting on a golden lily pad and lying at you to beat the band.

It saddens me deeply looking at into which fake  these churches have distorted my  message of Christ – during all these centuries.  It had been their order to manifest heaven on earth. But there exists no single religious commandment  which has not been violated by these self-appointed bringers of salvation. They are having another God apart from the Eternal Creator of all that is – the luciferic god of ego and power, they kill, they lie, they steal, they request others goods and chattels – they honour neither father nor mother – Christ Michael and Nebadonia – and they misdemean the dignity of man and planet.

You have a TV-Series revealing some facts relentlessly. I’m talking about “popetown” (MTV). There is friendly advertisement  showing Jesus not hanging upon the cross. Jesus is sitting there laughing. Laughing, dear ones, is a way to heal. This laughter here does not deface our teaching.  Furthermore it returns the true core to it, as the road to home is a joyful path. The laughing Jesus is the true one, as our message is a message of joy and love and hope, a toolbox for life on a material world. Popetown directly adresses the lacks and problems by cartoons. Sure, this series was named to be defaming by the catholic church.

There is popetown videos on youtube, just in case you whish to look at,
Eve. 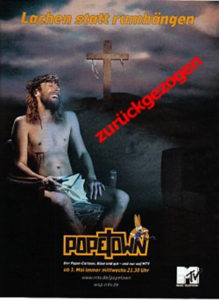 The writing on the  poster means : laughing instead of hanging around

This Series is an excellent image on double moral standard and the hair-raising grievance of an institution which claims to be the only representative of God on this plane, while in truth it is completely counter-indicated. What I’m talking about here is the core of this institution and not the peripherals, as there are truly loving hearts among there, seeking to follow the model role of Christ. But it is these hearts who are gagged by a construct which has nothing left in common with the to-be focus. It is the big churches in special who are the master performers of brainwash. Tell me, did they tell you about false prophets? No further comment.

Those who think they have to kiss all frogs – as one might be their prince – have reached their goal in the moment where they open the homepage of Christ-Michael.net, activating their receiver of spirit/mind. I strongly hope, dear reader, that you will recognize me here rightaway, even if I might just look like another frog to you. If you succeed sitting at my pond for a little while listening, you will find that exactly this frog is nobody else than your planetary Prince of Peace. Your seeking has been fulfilled! As time passes you will feel comfortable in our companionship – and I’m not just talking about just me, ahead of all is Christ / Christ Michael, followed by his staff. Our teaching is loving – we are talking to each other  friend to friend. .

If you want to call our message a religion, then please name it religion of love, as all of you are truly loved. There is much you have forgotten, and there is much which you do not know yet. We are joining you and explein what is good to know. You may profit from my experience and knowledge, just in case you whish to. We do not evangelize and do not urge anybody. Remain critical and questioning and illuminate the information we give to you by your heart. Among the basics you have been told by the churches much has to be corrected and changed.

See, we do not need pretentious domes, mosques or synagogues. We are not in need of unctuous rites and ceremonies. All we need is hearts of pure intention, love and friendship, truthfulness and the ignited spark which makes the spirit/mind strive for recognizing and knowing. We need two or more in the name of Christ, in the nature of mother earth who is more holy as your most holy temple of God.

I may appear to you as a frog and you may dare to kiss this frog – which means – you embrace the awareness of Christ inside your hearts, which results in the Planetary Prince being at your side through thick and thin. We are your oasis at the end of the long walk through the desert.  We tell you: Every single of you dear soul-carriers is also God, by the father-fragment you have been gifted with and which is living inside of you.

You don’t need priests and prayer leaders telling you that you had to have midwayer between you and God. You are grown-up already enough for a direct contact, you are the authorized officers of Christ Michael and you could as well kiss your own mirror image – in the morning when being in the bath room – no matter if you see a frog or a prince or a princess looking at you out of the mirror. As finally Christ Michael and Nebadonia are the total amount of all frogs and princes. Christ Michael experiences himself through you.  Then, 2000 years ago, he promised to return, and he is back now, and me as well.

We are among you and your helping hand for manifesting heaven on earth, according to the plan which had been set up then. Heaven is no place lost in reverie, it is meant to be among you if you just allow it to be like that. And me, dear ones, I AM and remain yours, Esu, planetary frog  – wanted to say “prince” (laughs) Be blessed.

The frog prince (just in case somebody has forgotten how the tale goes, Eve.)