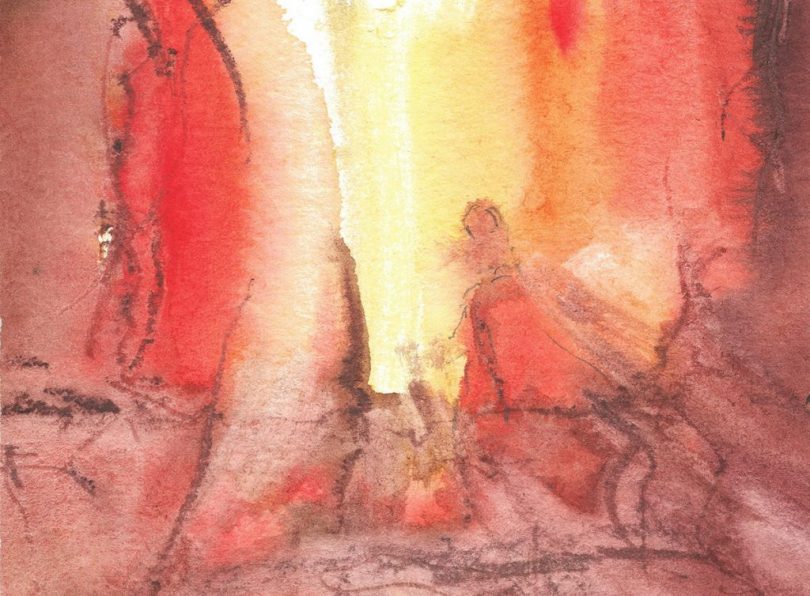 Esu offered me a mind trip, but I have to do something else first…. apologize with Lucifer, trying to get in touch with him. I hear a soft and gentle voice and on the display of my mind a charismatic person appears. He has big eyes, same as Esu, and a face of classic beauty, reminding me of the Greek sculptures. He looks like being much individualist, a philosopher, but an expression of harm has not yet vanished from his face. He tries to smile, I see it’s still difficult for him.

„Hello Eve,“ he welcomes me. „ You see, it’s still difficult for me to smile… I hope you don’t mind…“

I shake my head. „Never mind. I’m grateful to find you well and not insane, which I think was not too far away to happen.“

He tries again to smile, but at the same time his mouth is lifting up, tears start to flow down from his eyes, as if smile and tears were coupled. „Eve,“ he continues. „I’m so incredible thankful for all that you and your little team have done for me.“

Lucifers tears start running down his cheeks, while he kneels down, too and bows his head. „Who am I to have you on your knees in front of me, dear Eve, for being the most encouraged lady warrior I have ever seen. I had not perceived you before, back then, when I was still the „sovereign over Satania“. I had never dreamt about my Father’s creation bringing forth ascending sons like you …. How happy am I to meet you now…” He softly reaches out to take me in his arms and while we are still both on our knees we hug and stay like this for a very long time.

„They have told everybody I had denied to come home into the arms of my beloved Father..“ he says voiceless. „But in fact I never left home…. they used my name for cruelties and vandalism to my Father’s creation, by encouraging artificial life… believe me, Eve… I have never ever strived to be a creator or God… all I did was criticism of the high universal ranks who tried so obviously to mess around with my Father’s concept of creation. The „Law of not interfering“ was led „ad absurdum“ – until it turned against light and life. At this time back then I had successfully been managing my planetary system for a longer period.

I had pretty much understood my Father’s concept. And I had understood that he was aligned with Papa Source. So I was standing up to publicly tell what nobody else had the heart to do. I’m still missing the words about what happend then. It was a complete embargo set active against me and my people. They must have put CM’s seals on some documents he has never seen.

Contact between my Father and me was completely disabeled. They got my seal, too, to put it on destructive orders, to make it look like my decrees. I have even heard, Eve, that a double – a clone of artificial intelligence – had been created and programmed to travel around and infiltrate universal citizens. I have no idea, Eve, how such a degree of meannness can move into these high administrative ranks.

Eve, after this experience I was done with everything, to me it looked hopeless. I wasn’t even sure about my Father, whom I met the last time at the Orvonton courts, where his influence seemed to be like zero, they made him a nincompoop, but at least I saw from his face that he was overcome by mental torture and I felt he loved me. I had already asked to be uncreated, which must have caused additional horror to my Father.“

„Would the planet of the void not have been an option for you?“

„No, because some of them KNEW that I was not guilty of their accusement. The planet of the void would not have done anything to and with me, except from getting me out of their way. They wanted to make me cooperative with their godless plans which they called to „come home“ – they wanted to „break“ me.

After Papa Source had decreed that I must not be uncreated this option was missing to them, but they did not tell me. They also did not tell it to the public. They simply let me „disappear“ into this monument they had created to ridicule my Father after his last self-bestowal.

You know, Eve, my Father was in a felt need to become sovereign, as he thought he could then better solve the problems with his visitors. But they denied to leave, and they used the monument for putting him under pressure. They said they had means to blow it from a long distance, which would look like an accident, leading to my automatic uncreation.“

„Yes, pretty much. And I tell you, Eve, would my father not be such a genious and would he not have had warriors like you, the Kumaras and a few of his brothers, I’d still be walking the edge between being alive and uncreated, entrapped in the darkness. Meanness of certain forces starts to be exposed now and it leaves most of the people speachless.“

He slowly gets on his feet again and pulls me up, too.

„I’m so glad you are alive, Lucifer“ I say softly.

„I’ll never cease to bring light into darkness“, he replies. „My Father told me, the sentence about me was now being revoked and that my case is now being unfolded anew.“

Lucifer smiles. (works better this time) „Yes, YOU!…. Just joking, Eve. I’ going to be my own lawyer and this time Christ Michael’s voice as a sovereign will have more weight. And more are now couraged enough to speak out. If they offer it to me, I’m going to work again as the head of the Satania System.“

„I could imagine that CM wants to gift you with an own universe….“

„Perhaps yes, Eve… we will see…. as you always say, eternity is quite long, especially when approaching it’s end…“

He places my hand upon his heart space and I do the same with his hand on mine.