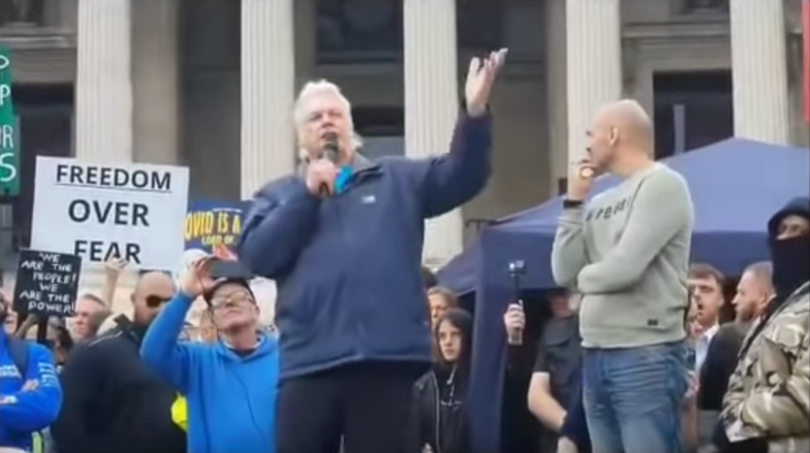 Protesst-Rallye in London against British Government and their Corona measures.

Transcript from Video by servants of Christ
The Speach of David starts in this Video at 2:10 min.

Speak your truth, and the world comes to you.

WOW, WHAT A SIGHT!  I have dreamed of moments like this so many times and despaired here and there that it would ever come …. and HERE IT IS:

No, it’s not the majority yet, nor even nearly so, but the momentum has begun and the spirit of this place must sweep across the world, if we are to stop Orwells bunt stamping on the human face forever!

We face a big, big challenge and it will require an enormous on quench and determination and fortitude, but we WILL NOT CRUMBLE, WE WILL NOT FAIL!

The consequences for ourselves, our children and the human family are UNTHINKABLE: WE CANNOT FAIL! We have come here today to put on public display our indiviual and collective self respect!  SELF RESPECT IS THAT WHICH HAS BROKEN EVERY TYRANNY IN HUMAN HISTORY, FOR SELF-RESPECT ALWAYS TRIGGERS THE POWER OF  NOW!

We will not hand control of our lifes and our childrens lifes over to people like the UK health secretary Matt Hancock, a man, who – if his brains were gunpowder, would not blow his hats off  –

(oh, oh, me  brain’s about to explode…. taff) Hancock and Johnson, Whitsey and Vallance,  Fauci and Buck, the fascist and your Andrews xxxx  of Victoria  – what my brother Paul calls faulty waters… light may be on, but not very bright, … Where is the self-respect in giving our lifes to such people and doing whatever they tell us  —

Before us today is every race, every color, every creed, culture and sexuality, WE MAY NOT AGREE ON THE FINE DETAIL OF LIFE BUT THAT’s GOOD – for what a boring world that would be, if we did. BUT WE ARE UNITED PUTTING DOWN THE FAULTLINES OF IRRELEVANT LABELS TO SAY: WE ARE FREEDOM! AND WE’ll ACCEPT NOTHING LESS – and  I say to the police officers here and around the country, around the  world: I feel no animosity to you, you are trapped by the psychopaths into enforcing fascism for the psychopaths, FASCISM THAT YOUR CHILDREN, YOUR FAMILIES AND YOU WILL HAVE TO LIVE THE REST OF YOUR LIVES WITHIN, BUT THERE IS ANOTHER CHOICE, POLICE OFFICERS, MILITARY PERSONNEL OF THE WORLD: AND THAT IS TO CEASE TO ENFORCE FASCISM FOR THE PSYCHOPATHS, AND TO INSTEAD ENFORCE FREEDOM BY PROTECTING YOUR PEOPLE FROM PSYCHOPATHS!

We stand amidst extraordinary, almost unimaginable  deceit, A DECEIT THAT INCLUDES A FAKE TEST PRODUCING  FAKE CASES TO PRODUCE FAKE EXCUSES FOR REAL FASCISM! A TEST, WHICH IT’S INVENTOR SAID, SHOULD NOT BE USED FOR WHAT IT IS BEING USED FOR – A DECEIT THAT INCLUDES THE MANDATORY WEARING OF MASKS ON THE EXCUSE OF IT’S PROTECTION OF OUR HEALTH, WHEN IT IS GOING TO DESTROY THE HEALTH OF VAST NUMBERS OF PEOPLE WITH SUPPRESSION OF OXYGEN, BREATHING IN CARBONDIOXID, BACTERIA, MOLD IN THE MASK, THE VERY OPPOSITE OF WHAT THEY CLAIM – AND WHAT WILL THEY SAY WHEN THAT STARTS TO UNFOLD – “PEOPLE THAT  ARE DYING   ARE SUFFERING VOM COV19“ – MASK 19, MORE LIKELY! AND THE MASK IS THERE TO BE A SYMBOL OF OPPRESSION, OF SUBMISSION, A SYMBOL OF BEING SILENCED, A SYMBOL OF DESTRUCION AND DELETION OF INDIVIDUALITY – AND AN EXCERCISE IN MASS GLOBAL DEHUMANISATION!

PEOPLE OF THE WORLD, IF YOU WANT TO EXPRESS YOUR FREEDOM IN THE FACE OF FASCISM,

What is happening in current events is only possible because of a long planned long unfolding war on the human psyche, and the foundation of that war is to persuade billions of people that they are just “little me” with no power. For the psychopaths know that a little-me mentality, a little-me self-identity will by cause and effect lead individually and collectively to a little-me  life experience. SO, NUMBER ONE IN BUILDING THE NEW TODAY AND THE NEW TOMORROW: NO !  MORE!  LITTLE! ME!   BE GONE WITH YOU!

ALL MATTER IS MERELY ENERGY CONDENSED TO A SLOW VIBRATION –  WE’RE ALL ONE CONSCIOUSNESS  EXPERIENCING ITSELF SUBJECTIVELY – THERE IS NO SUCH THING AS DEATH – LIFE IS ONLY A DREAM AND WE ARE THE IMAGINATIONS OF OURSELVES – AND WHAT THE HUMAN FAMILY HAS DONE IS TO ALLOW THE PSYCHOPATHS TO HIJACK OUR IMAGINATION OF OURSELVES AND WE NEED TO TAKE IT BACK.  THE PSYCHOPATHS HAVE KEPT FROM US A SPARKLING, SPARKLING TRUTH WHICH OPENS ALL DOORS AND ALL GATEWAYS, THAT THIS WORLD IS BUT A DREAM AND THE DREAMER IS THE DREAM, THEY ARE INDIVISIBLE, WHAT WE BELIEVE, WE PERCEIVE, AND WHAT WE PERCEIVE WE EXPERIENCE AND IT’s TIME TO TAKE BACK OUR MINDS FROM THE PSYCHOPATHS, TAKE OUR PERCEPTIONS BACK FROM THEM AND TO DREAM ANOTHER DREAM!

A DREAM, IN WHICH THE FEW CONTROLLING THE MANY PLAYS NO PART!

Bill Hicks used to finish his shows like this: The world is like a ride in an amusement park – and when you on it you think it’s real, for that’s how powerful our minds are. The ride goes up and down and round and round – and it’s very brightly coloured, it’s very loud and it’s fun for a while – some of you are on a ride for a long time and begin to question: is this real? Or is this just a ride? And others have  come back to us and they say – hey, don’t be afraid ever, ’cause this is just a ride! And we call at  those people “Shut him up, I got a lot invested into those people, shut him up, look at my throws of worry, look at my big bank account and my family, – this HAS to be real –  it’s just a ride. And we always try to kill those good guys that tell us that – and let the daemons run amok, IT DOESN’t MATTER, FOR IT’S JUST A RIDE AND WE CAN CHANGE IT ANY TIME WE WANT – NO JOB, NO SAVINGS OF MONEY – JUST A CHOICE RIGHT NOW BETWEEN FEAR AND LOVE – AND THAT IS ALL IT IS – ALL IT DOES EVER BE  –   FEAR, THE CURRENCY OF CONTROL – SAYS  I FREEZE, I OBEY, I SUBMIT  –

AND WHAT LOVE BRINGS IS A BACKBONE OF STEEL – AND A POWER OF NO:   NO, I WILL NOT COOPERATE WITH OUR OWN ENSLAVEMENT OF BILLIONS OF US AND A HANDFUL OF YOU –

WHEN WE WAKE UP TO THAT, THE GAME IS OVER!

THANK YOU VERY MUCH!

As we hear, shortly after David had finished his speech, police invaded the demonstration and arrested David Icke.

Keep going, spreaders of the truth!