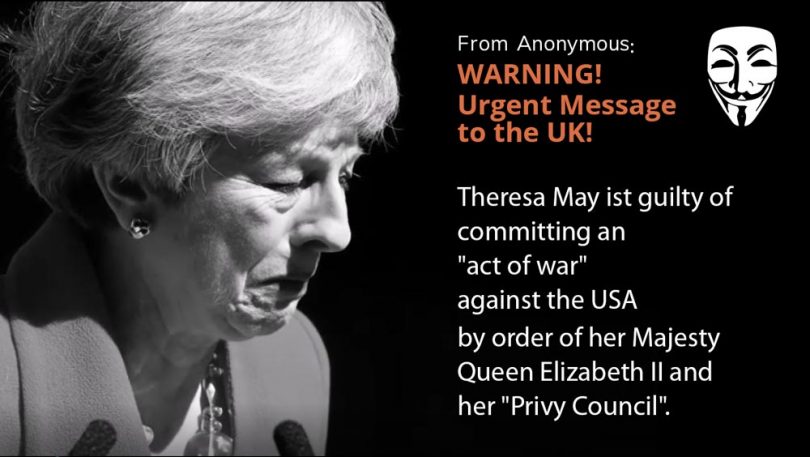 Some transscrips from the video:

Did Theresa May resign because of BREXIT?
THE STORM IS HERE!

Find out the real reasons!
TREASON: The Crime of Betraying Ones Country.

The UK vs USA

They never expected her (Hillary) to loose.
They (the Black Hats) planned a nuclear World War with Russia.

What they were blaming Russia for, they were guilty of themselves.

The UK/MI6 have been begging Donald Trump not to declassify Russiagate Documents.
Operation Crossfire Hurricane was a UK State Project, a cross party project, meaning they were all involved!

Theresa May ist guilty of committing an “act of war” against the USA
by order of her Majesty Queen Elizabeth II and her “Privy Council”.
They spied on American Citizens and did their best to overthrow a duly elected American President.
THEY FAILED!

The American Storm has arrived in the UK!

The Declassification of the SPYGATE/RUSSIAGATE documents
will show you how the UK Corporation risked all of our lives
in order to “cover up” their crimes!

Now it’s time to find out what they did!
And how they did it!

People of Great Britain,
prepare your family & friends,
the Americans are coming!