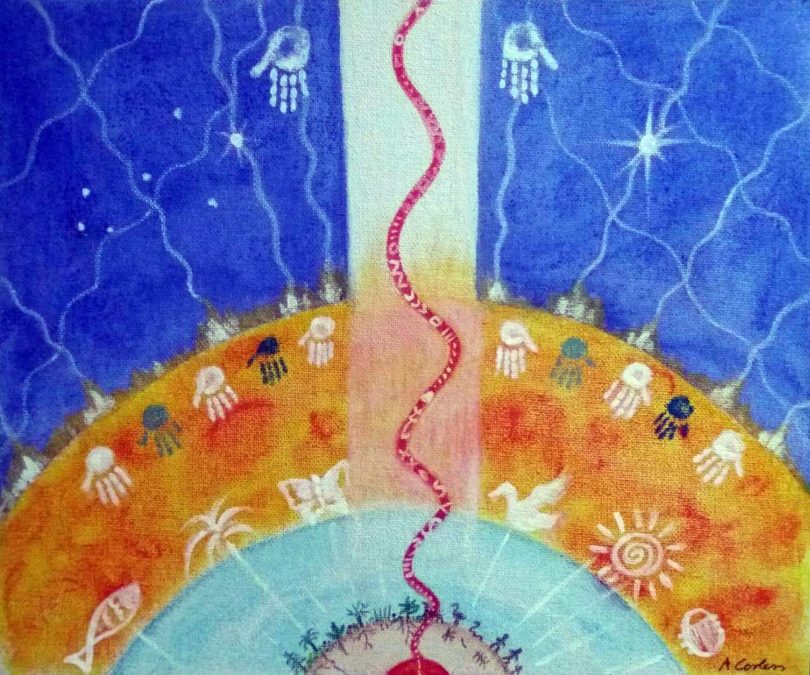 at the dawn of a new era

Eve: Recently I did much research on mind programming, Dispenza, Lipton, Bradon, Robbins and the refreshing Jake Ducey. Afterwards – in perfect synchronicity and serendipity – found the passage of PJ 34 on meditation and self-hypnosis, chapter 6, which is really great stuff. I understand that every person has to set up a new concept of self, including me, the new Eve.

Esu smiled and said: „actually you are returning to be your original concept, so be it.“

By that he meant the concept of awarely embracing the creative force of manifesting, in favour of the Divine light.

The topic is about exiting the matrix of the dark and I remembered the analogy of Pippi Langstrumpf, the main character of a book for children by the Swedish author Astrid Lindgren.

Little Pippi was still living in her Theta-years of downloading the basic programs for her “mind-computer-subconsciousness” and by having grown up with her super creative father she had a completely different program than her friends Tommy and Annika, who had already been successfully programmed into the matrix of the actual society.

We are heading for 2020 and here the new era starts. I’m told that the prolongation from 2000 to 2020 was because of the awakening potential contained in 911. We have now witnessed a 20 year period of increasing antichristed rulership worldwide, with a crescendo starting in 2012. The biggest chess game of the age. We have been motivated from year to year by being told that “day x” was “soon to come”, just to keep us holding on. Looking backwards I must say: that was pretty reasonable. Anyway the worst plans were restricted from becoming manifest. Actually a fine thing and a big mercy upon us. When CM said, he (still) had an “ace in his sleeve”, he certainly not only thought about the “army of the dead”, but also about playing his “Trump-card”, which is working out fine by the help of “Q”. It’s “America first”, so we will have to hold on in Europe, until the move out of the diabolic hierarchy will have been effectively done.

Greetings to our beloved ground-crew and students, just let me shortly adress a few things to you.

You must now actively say good-bye to your past, as you are about to awake to a new morning. Your past can be imagined as chains and iron balls you carried with you all the time, and your “spiritual selfmade specialists” encouraged you to make never ending dives into the deep sea of hurtful experiences, but you must understand that this has to come to an end now. You cannot cling to your past any longer and bath into the traumatic emotions connected to it. By this you just create it over and over again.

Rise, as your oxygen bottle get’s empty. It does not matter anymore what you find among the wreckages of sunken ships, not even if it’s your own wreckage. Your time for the test is over, you gotta hand over your writing sheets to your teacher, who will soon let you know, if you will make it to the next grade. You had your lessons covering the „mechanics of the mind“. You have been handed over the keys and stuff and housekeeper toolbox. Actually, they were handed to you about 30 years ago, but remained in slumber in the PJ archives. Had you but read this more readily and passed it on, how glorious your journey would have turned out. But anyway, we are here, at the final breathings of the old, at the dawn of the new to come, in the times of Q and the Trump-card, so you may well expect a turbulent take off into the new era, while the truth is taking her touchdown to land and be here, the “gear” is already down. Turbulences have been and still are occurring. The coming age will be the age of the heart, age of goodness and of brotherhood, in which just those will strive who regard their beloved planet as their living shelter.

In this regard let me shortly comment on your “climate movement”, which is nothing else than another dead end, incorrectly labeled by your still-to-be-overlords. Under current circumstances the use of electric cars will bring nothing else but more problems, which is actually fully intended and set up to suck the last bucks from your bank accounts. The climate is made by your sun and mankind can do nothing to change it – at least not by the technical means available on the planet right now. Any off-planet actions will be restricted immediately as they would affect other civilizations.

Your problem, guys, is not the climate, it is YOU, up from the highest ranks of economic power players down to the individuals leaving their waste behind them upon the ground of the planet. It’s the mass-programmed army of ants in blind greed and material robbery against anything making their environment – the no-see-no-hear-no-listen-fully digitalized subjects of a mind-controlled species who will learn by nothing else but hardships. So the big question for many of you is “how can I escape from the matrix”?

YOU ARE NOT ABOUT TO ESCAPE FROM THE MATRIX, YOU NEED TO TRANSFORM IT FROM WITHIN!

This is a question signalizing your wish to leave your working place. Clearer: Your spot, where you are expected to do your work, big Nono, so don’t say „leave“ or „escape“, as you were placed there for a reason.

So the more correct expression would be “perforate” or “peek through”. If you imagine the matrix like a dark ocean, every peek through is an island of light. If everybody becomes an island of light, all will become a sea of light, so you will literally live IN the light amidst the matrix, like lighthouses in shorter growing distances to each other, inviting others to also become their islands of light and become true creators. You are not going to do this with any crutches but simply by your mind!

This has nothing to do with the “happy camper syndrome”, where the first choice is to be ignorant in regard of evil. It’s primarily about embracing and understanding your mental power, your “getting it” of how it works to create your life. It is not about giving yourselves fancy “spiritual names” and setting yourselves beyond eye sight by celebrating foreign language mantras. It is first about getting your own house in order and clean up the subconscious minds from the intentional bugs of your external programmers, a process which will inevitably lead to gaining back your power. The wisdom in which you will most hopefully apply this power is setting you on the right track for the journey home.

So, how can we describe your challenge? It’s “not living in/by the matrix while still being amidst the matrix field, it’s connecting into the quantum field and actively creating after clearing of your subconscious mind from dark matrix stuff, and by that carving the matrix out until it crumbles and falls apart. The new energy and higher vibes will be more supportive to the light people than to the low-vibers.

You are to do this at your end and we are doing our supportive jobs from our ends.

The crumbling of the matrix has already started. Many facades are merely remnants of stage decoration, fake facades, with no more real substance behind. Keep phoning home, beloveds! Make up and feel a cleansed world, emotionally celebrate the victory of the light and perishing of the harmful dark stuff before it may even become fully applied against you. We are the best phone advice ever, even at no charge! And the divine support will always be friendly and patient, equal how often you call us. Check out your tool boxes and embrace being creators. Feel as if you have already have made your results successfully and make it at least your morning and evening routine, wherever you are!

“I am so happy and grateful

that 5 G was now prevented from being established worldwide
that crime and Satanism of the dark has left the planet
that A.I. was eliminated right in time
that the communist socialist concept was trashed all over
that the divine laws are now groundwork being honored and applied
that our children and animals are safe now
that the NWO was totally trashed without return
that all nature is in balance again
that the planet is now freed and fully in the light
that love and brotherhood have now fully taken over our societies

(…..) and whatever it is that you privately wish to manifest as a win-win situation of the light for the greatest good of all.”

Get into Theta-brain-waves (slowing down your breath awarely works) and start to create the new life NOW, with self-discipline, wisdom, regularly (in meditation), out of a mood of gratitude and bliss, by reaching out into the quantum field as pure consciousness, to make your quantum leap and become your own leap-frogs!

(he sent me an image of the Q-frog, playing leap-frog)

(P.S. And kiss this frog, it might be your planetary prince!)

Eve: Esu relates to the tale “the frog king”, there was already an earlier message years ago, when he used this tale metaphorically

HUMAN POTENTIAL, the Secret has been discovered